I for one have been waiting a long time for this AUTOart release, I already added a few 1/18 scale Lamborghini Centenario models to my collection, but with only MR making the Roadster version I was really looking forward to finally add this very special Raging Bull to my collection in the correct shade and with opening parts, and judging by the fact the first batch sold out rather quickly I wasn't the only one waiting for this specific model.

When Lamborghini unveiled the Centenario at the 2016 Geneva Motor Show we already expected them to release a Roadster version too, but it would take until August 2016 for the Centenario Roadster to be unveiled at Pebble Beach in the United States, and just like the Coupé version only 20 units would be built for customers ... an all of them were sold out before the public even saw the car.

And while the Centenario uses an Aventador basis, nothing much of this production model can be found in the limited edition Centenario, on the Roadster this is taken even further as no roof has been designed ... just like on the Aventador J and the Veneno Roadster, the Centenario Roadster is a true 'barchetta' without any kind of roof to be mounted when it rains. 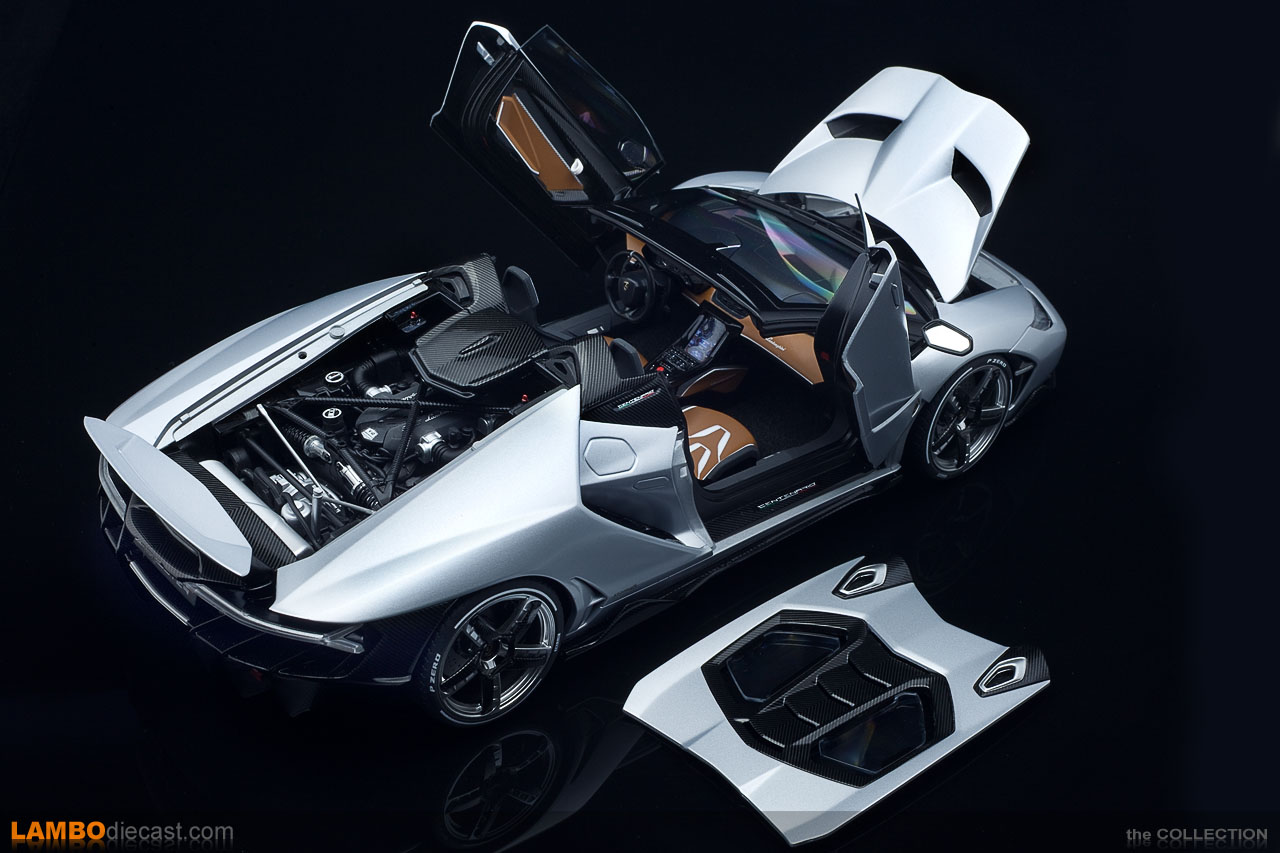 For the design of the Centenario, Lamborghini looked into their past ... the front reminds us of the stunning Miura from the Sixties, while the wheel arches have been inspired by the legendary Countach ... the headlights are more modern taking a look at the Urus while that thin taillight design looks like the one from the Asterion Concept.

Just as with the Centenario Coupe you could opt for a clear carbon fiber body ... at a €300,000 option mind you, and while the Centenario LP770-4 in Geneva was finished in clear carbon fiber with a yellow livery, the Roadster version was shown in a very special 'Argento Centenario', a satin-finished shade of silver over a brown interior aptly called 'Terra di California' with Bianco Polar details ... now I've never been a fan of putting a brown or a tan interior inside a white or a silver car ... but it seems Lamborghini thinks it works perfectly together.

While the Centenario Coupe has been built by various makes in different scales, 1/18 for instance from MR as a high-end resin or Maisto as a lower end diecast (note the Maisto Exclusive series is very nice indeed), the Roadster version was only available from MR in 1/18 scale at a hefty price, so when I heard AUTOart would be releasing the Centenario Roadster in the correct Argento Centenario over Terra di California combination I couldn't be happier ... until I learned about the price ... this is an expensive model, I bought it at €225, which still is about half of what an MR would cost, but it's a lot of money nonetheless ... so is this new AUTOart model worth that kind of money?

We'll see about that ... first we'll take a look at some of the details, especially that brown interior ... I already mentioned I not a fan of that shade inside a silver car, just imagine how good it would look in red or even a light grey ... but brown? Well, I have to admit AUTOart shows the right shade on the seats, door panels and top of the dashboard, they even have the cross stitching pattern on the dashboard, the white 'center' on the steering wheel and the white 'pulls' on the door, just like the white piping on the dashboard pod, which shows a carbon fiber section as seen on the real car, and AUTOart included the white inserts in the seats ... but why didn't they add the cross stitching to the seats and headrest too? Would that be too small to reproduce in 1/18 scale or is this an oversight on their part ... very strange ... but the white Raging Bull crest is there on the headrest. 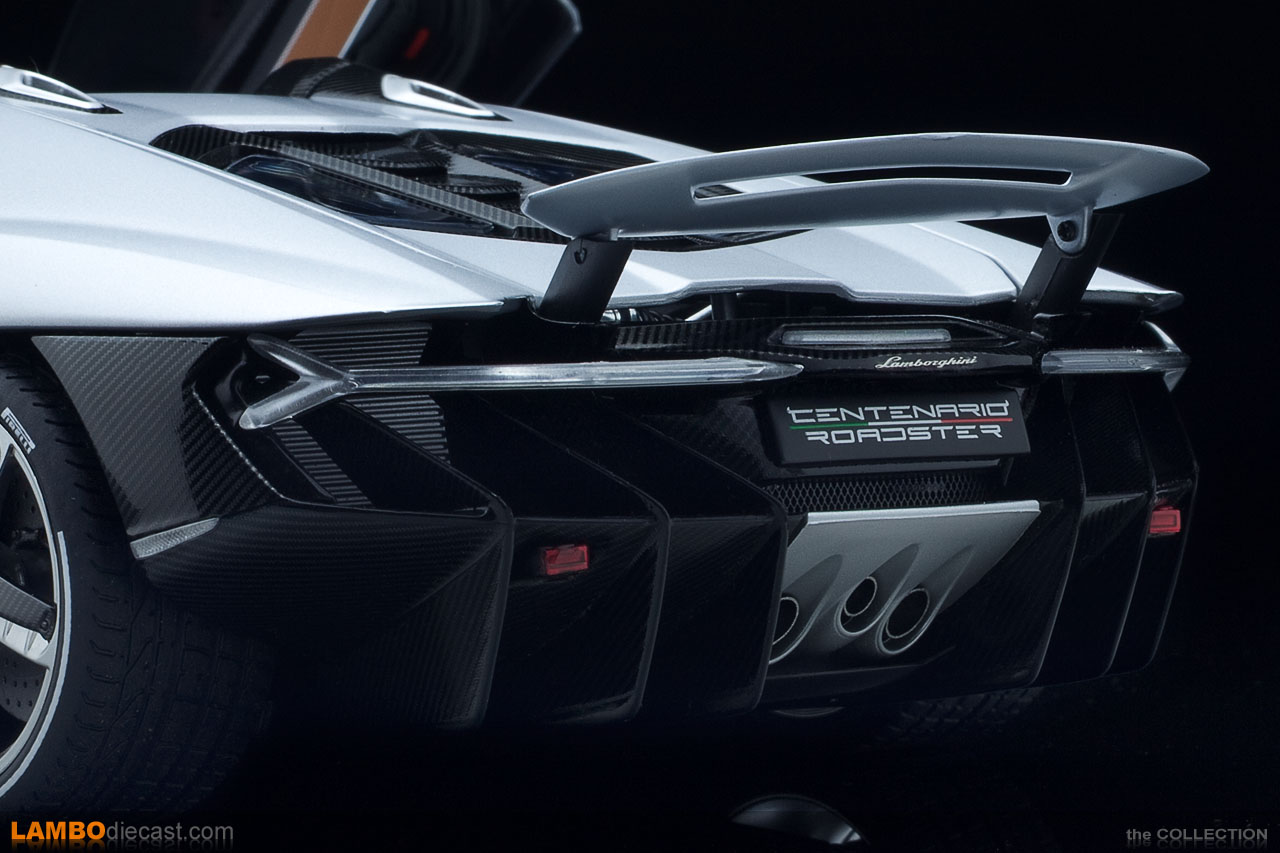 Going to the outside of this scale model we naturally can't ignore the adjustable rear wing, AUTOart has included this in their model, and it looks amazing when up, and perfectly flush when down, no issues here, and while the Coupe version came with a satin finish carbon fiber rear diffuser, the Roadster received a lot more glossy carbon on the outside, the rear diffuser, parts of the engine cover, just about the entire roll-over section behind the headrests, the rearview mirrors, the lower front fin, and the entire side sills ... all finished in flawless carbon fiber on this AUTOart model ... being a big fan of carbon fiber (I prefer it over the new Forged Composite to be honest) I just love these details on the scale model.

I do have to admit the carbon fiber pattern is a bit large if compared to an MR model for instance, but keep in mind this is a fully opening model compared to a sealed resin, and while the pattern looks larges side by side, it surely doesn't look oversized when admired on her own, I don't have an issue with the carbon fiber pattern on this AUTOart Centenario Roadster.

The real car came with carbon fiber fins on the silver wheels, so this AUTOart model replicates those very nicely, including the white livery on the tires, the P Zero and Pirelli script are nicely done, as is the white line, even the thread pattern on the tires looks amazing on this scaled-down version of this Raging Bull. The drilled disk brakes and black caliper are very nicely reduced in size and as we are used to when it comes to AUTOart, the air intakes and vents are open on this model, even the ones on the doors and above the headrests ... amazing attention to detail from AUTOart here. 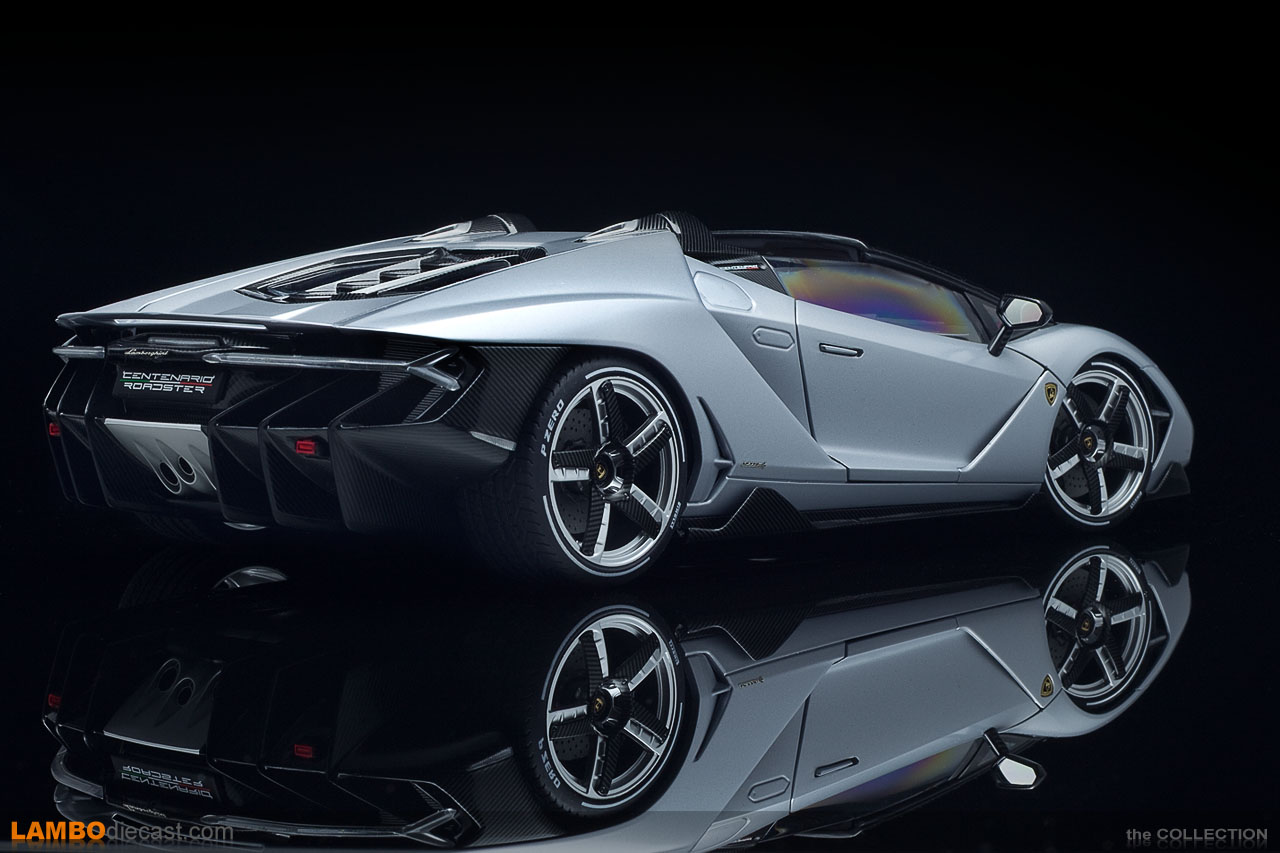 Just as one the real Centenario Roadster, the engine cover can be lifted from the car (in real life this is best done by two people, on this model you can manage on your own) to reveal the impressive Aventador sourced V12 engine, the glass sections on this engine cover already show the top of the engine, but when you do remove it you can admire so much more details ... this is without a doubt one of the best engines AUTOart did on the Lamborghini models ... but they did get one detail wrong here.

Don't ask me why, but Lamborghini decided to use yellow springs on the suspension of this Centenario Roadster show car in the press release ... there isn't a hint of yellow anywhere else on this car, so why they went for yellow springs is beyond me ... but AUTOart used black springs here. Which corresponds to the black brake calipers, so it looks perfectly fine ... and it seems Lamborghini had the same idea as I've heard they fitted black spring before the car was unveiled in the United States.

So is this model worth the €225 price tag? For me this one was an absolute 'must-have' for my collection, the Lamborghini Centenario Roadster is a limited edition supercar made to celebrate the 100th birthday of Ferruccio Lamborghini, so both the clear carbon fiber coupe and this satin silver Roadster are must-haves in my opinion, and to be honest, these 1/18 AUTOart models of the Centenario are simply stunning.

Sure there is the cross stitching that's missing on the seats, and one final detail on the interior is missing ... the door panels should have a section that shows laser-cut openings as seen on the real car ... but those are small details most onlookers wouldn't even notice, so for me this is a near-perfect scale model and I have it proudly on display in my collection.