You might think this is another one of those Kato-San LB Works limited edition Lamborghini models, with those wide wheel arch extensions and low riding air ride suspension ... but in case of this bright orange metallic Lamborghini Diablo you are wrong, this is not an LB-Works Diablo, as far as I know, Kato-San didn't modify a Diablo ... yet.

This 'Sunset Dream' as she is called has been created by Souki, a car customizer  in Tokyo during the day, and an EDM music maker during the night ... he already created a famous Nissan Skyline in true boso style, but his love for low riders, Bosozoku ... and supercars took the better of him and led to the creation of this one of a kind Diablo that was built in Sant'Agata in October 2000, sold though Lamborghini Newport Beach in the United States of America.

In late September 2012 his Instagram account shows the first photo of an Arancio Atlas Lamborghini Diablo VT 6.0 with black painted, factory wheels but looking stock as far as body goes with the exception of the angular rear wing ... in August 2013 a photo shows a different front bumper in Murciélago style, now with additional splitters on either side combined with side sills in a similar style and new custom wheels.

In May 2015 the original headlights were replaced by custom made units boasting a very nice C-style LED daytime running light. In late November 2015, an AirRex air ride suspension was installed, lowering the Diablo completely to the ground.

In March 2016 he started work on the original front bumper, by May 2016 he replaced the first custom front bumper with a Huracan inspired version, complete with a full width lower splitter, totally changing the front look of the Diablo, by September 2016 he replaced the factory original engine cover with a brand new one he created himself, now with three perspex louvers that allow an amazing view on that massive V12 engine, later in October 2016 Souki painted the entire roof, engine cover and rear section on his Diablo in glossy black, making those louvers stand out even more, showing the grey engine manifolds.

Starting out with a drawing of what Souki had in his mind posted on November 2016, it took him six months, until May 2017, to create the wide fenders from scratch to be test fitted, just as with the impressive LB-Works widebody fenders, Souki had to cut into the original bodywork of his Diablo to be able to fit the 20-inch Sky Forged S216 wheels from Azzurre Motoring under the wide fenders, fitted in gloss black in July 2017 when they matched the roof ... but by August 2017 the wide fenders were finished in the same, stunning Arancio Atlas as the rest of this unique Diablo.

In 2019 Davis&Giovani creates an amazing 1/18 scale model of this unique car, limited to 30 units, I managed to get hold of nr 25 after a lot of doubt ... this is officially the most money I paid for a scale model Lamborghini in my entire collection to date, some of my models might be worth more now, but I never paid this much for a single model before ... so I took some time to finally reach out to Tiago from Rare118modelcars and ask if he still had this orange metallic version in stock ... and he did. 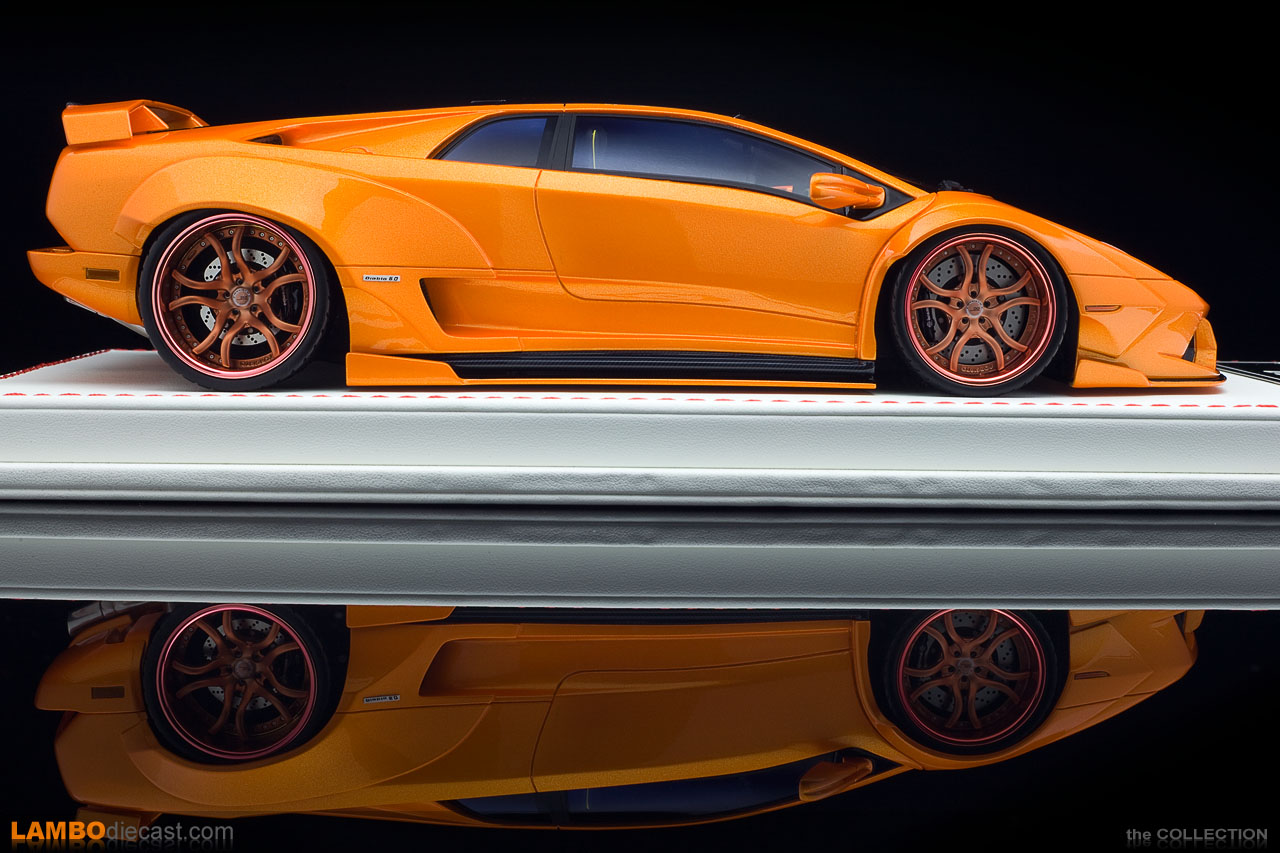 There are some other shades made by D&G too, like a very nice dark metallic red one, but in real life this is the only one in existence, and it's finished in Arancio Atlas ... and you know me, I don't like fantasy shades on my models, so I specifically wanted this exact model for my collection because no other company makes this specific Diablo VT 6.0 and I really wanted to know if these very expensive Davis&Giovani models are worth all that cash.

Now I have seen D&G models being listed for totally ridiculous prices on eBay, €1,000 and more ... and that is just crazy money for a sealed 1/18 scale model, this Diablo was available for €635, still a lot of money for me ... that buys almost 3 AUTOart models instead, but I saved up a while to get this kind of money available ... made the order, paid Tiago ... and had the transport company mess up the delivery ... my package almost went back to Portugal! 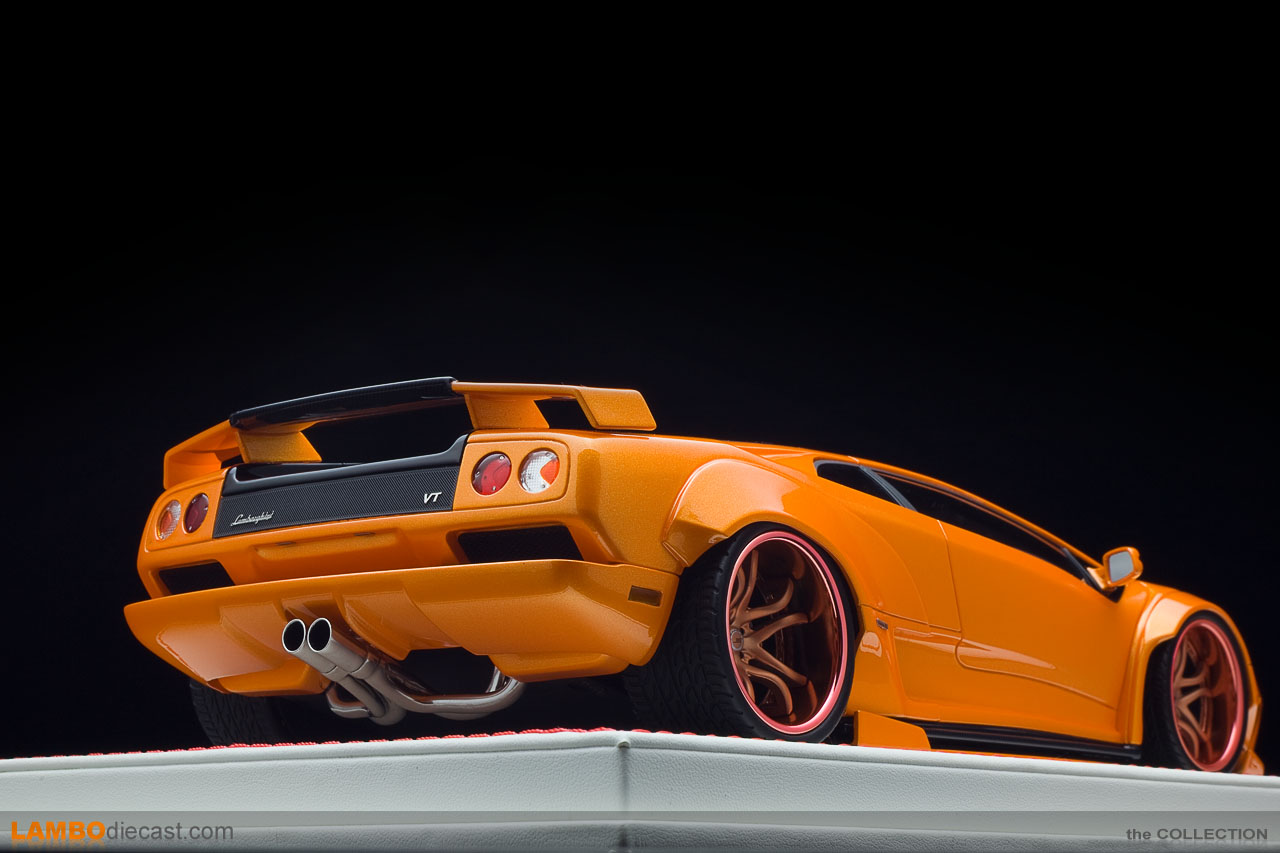 But it didn't, and I could finally admire my very first D&G scale model, and see for myself if these models are indeed worth their high asking price ... and at €635 I have to admit they are really good, very nicely  finished, a perfect paint job, I couldn't find any flaw in the paint, and the details are just amazing ... I was under the impression MR models were great, but D&G is on a higher level indeed.

The wheels and tires are just magnificent, as are the disk brakes and calipers, on this model the calipers are black, but even then you can distinguish the fine detail on them, and just look at those exhaust tips and that Lamborghini script at the rear ... they almost look real, this is a high-end scale model indeed, they even put the three screws on the round taillights, just like on the real car ... that's attention to detail on a different level compared to most other models in my collection. 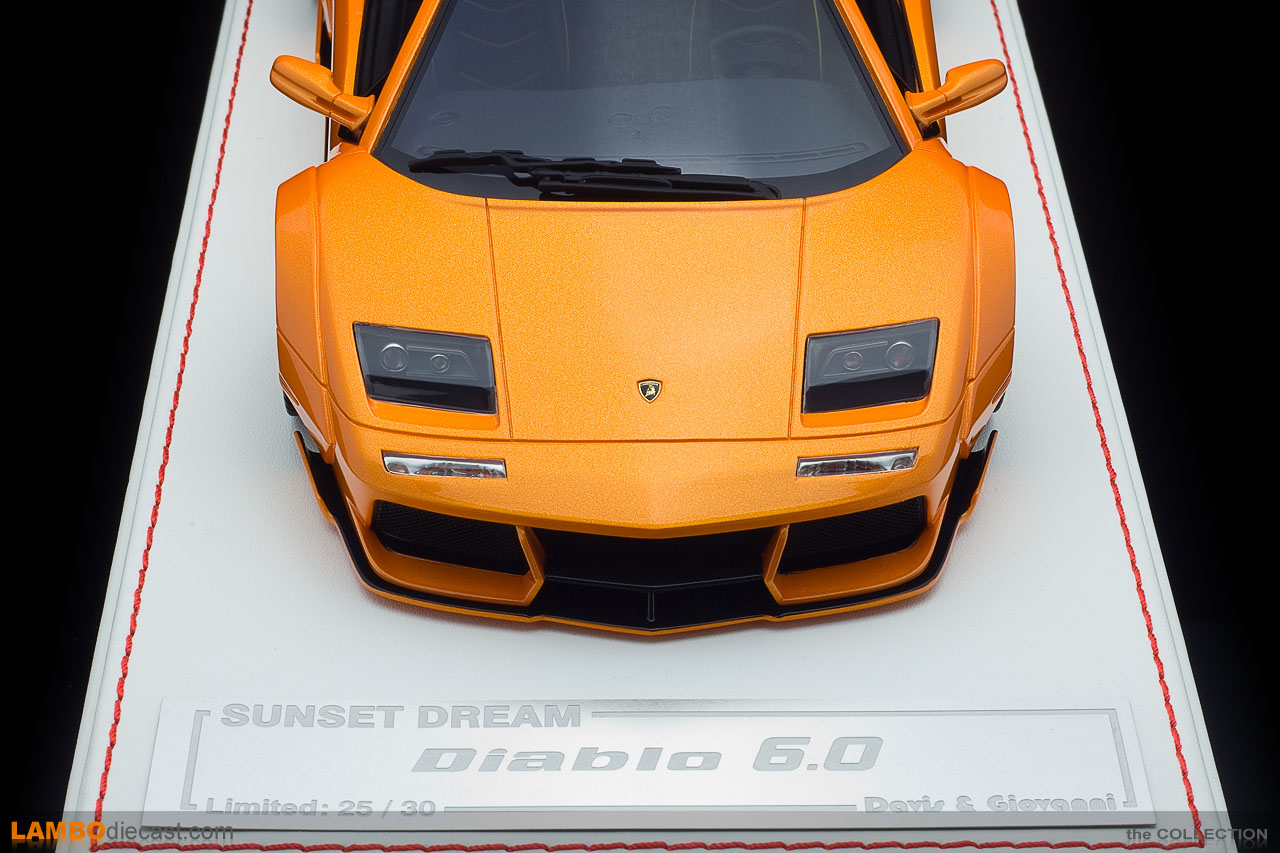 Now Souki replaced the original headlights on his Diablo VT 6.0 with custom made LED units, and this D&G model naturally has these too, as far as I can tell from actual photos I found online of the real car, this Sunset Dream model from D&G is a perfectly scaled-down replica ... and I love it.

We've all seen the glass engine covers on the Murciélago and Gallardo, even the Aventador and Huracan ... but in the days of the Diablo, this was not an option ... but that didn't keep Souki from creating his very own engine cover, with glass louvers, that clearly show the massive V12 engine powering this 'Devil' from Sant'Agata. 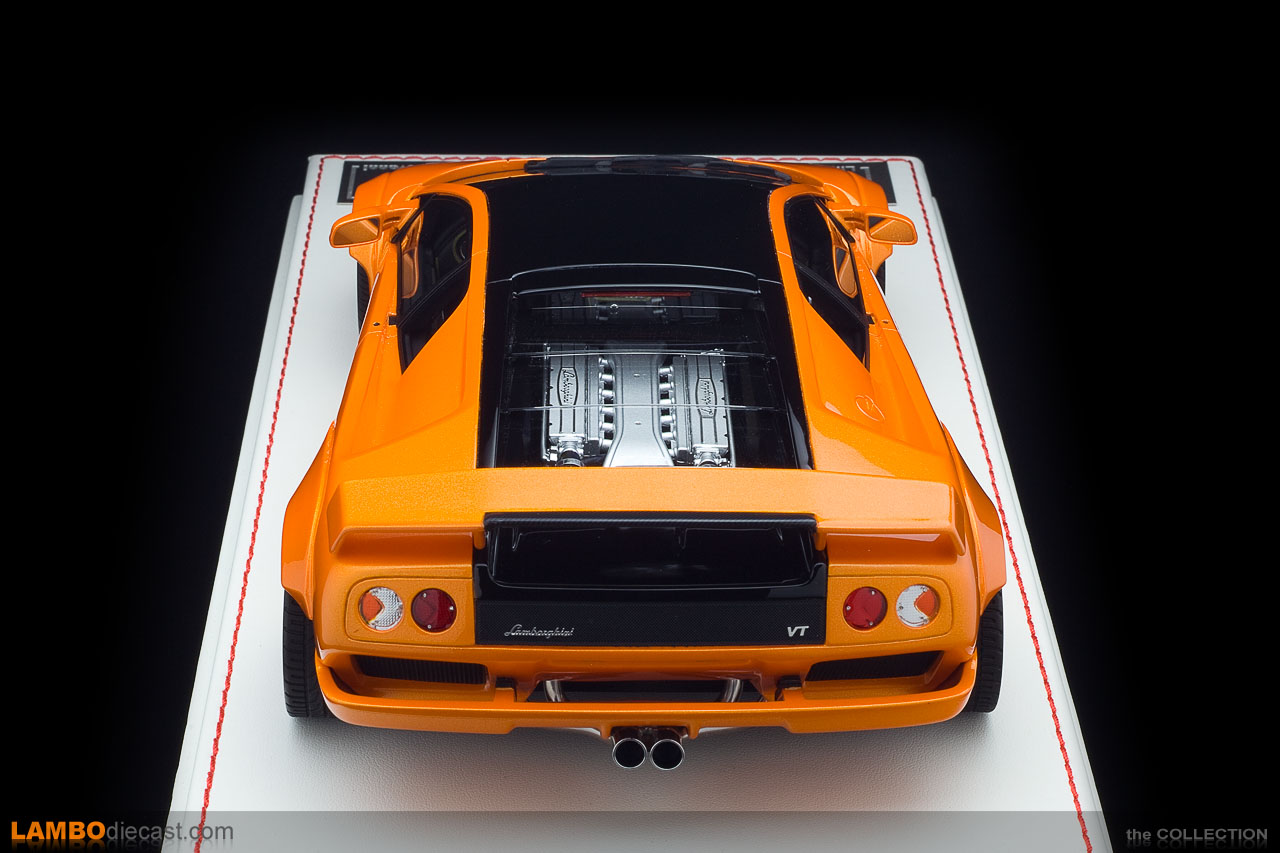 And D&G managed to put just the right amount of detail on the engine and inside the visible engine bay to have you admire this 1/18 scale version even more, and then you discover the interior ... and you take out a magnifying glass ... D&G clearly shows how the stitching on a 1/18 scale model should look.

Both on the seats and on the dashboard the double stitch pattern is just mind-blowing, it is absolutely perfect, this is how it should be done, add the carbon fiber central console and you just can't believe it ... and then you gaze upon the dials behind the steering wheel. And they look as real as it gets ... the windows used by D&G are unbelievable clear, and show the interior perfectly, every little detail, every switch and dial ... all the meters in front of the driver's seat ... just absolutely magnificent.

This is a very expensive model, don't get me wrong, and I probably will not be able to add a second D&G model to my collection any time soon, it took me a long time to finally part with this kind of money for one single model ... but I don't regret it ... too much.

This is a one of a kind Lamborghini Diablo, and no other company makes a model of this one, so I had no choice but to get my first D&G model in my collection ... should I advice you to buy D&G models too? That all depends on two things ... are you into these strange, very personal, highly customized Lamborghini models ... and can you spend this kind of money without having to be hurt on any other area financially.

That for me is the bottom line with each and every model I add to my collection, can I spare the money without hurting myself, I never buy a model with household money, that is just wrong, every model in my collection is bought with 'spare money' I saved up, just like this outrageously expensive model.

I love this D&G model, and if I had the money I would surely be adding more models from Davis&Giovanni ... these models are probably the best, most detailed 1/18 scale models you can find on the market today.