A rumor about a special Lamborghini model to celebrate the 100th anniversary of the late Ferruccio Lamborghini (1916 - 1993) surfaced back in July 2015 already, a very select group of VIP customers were invited to Pebble Beach for an exclusive preview of a new hypercar from Sant'Agata ... nothing about styling was known at that point and a price of €1,500,000 was mentioned, we all hoped the car would be unveiled at the 2015 IAA Show in Frankfurt ... but that didn't happen.

Fast forward to February 2016 when, after the name 'Centenario LP770-4' had been trademarked by Automobili Lamborghini SpA, the first look at the design of this new Raging Bull was found online in the trademarking of 3D renders for the styling of the Lamborghini Centenario LP770-4 ... the response was mixed, but keeping in mind these were black and white 3D views we still had to wait to see the car in real life before making final judgment ... which happened at the 2016 Geneva Motor Show ...

Only 20 Lamborghini Centenario LP770-4 Coupé would be built, the base price was set at €1,750,000 before taxes, and if you wanted to get the clear carbon fiber body as seen on the Geneva show car you had to select this option at €300,000 ... still, all 20 units were sold before the press even saw the car in March.

As usual, MR was the first to release a 1/18 scale model of this new Lamborghini limited edition model, but I decided to wait for a more reasonably priced model with opening doors, the interior of the Centenario was too special to go for a sealed model at €400 or more.

I just knew AUTOart would be releasing this Lamborghini too, so I set my mind on adding that one to my collection, it should be available during 2019, but when I visited the Essen Motor Show in Germany in December 2018 I was able to get hold of one of those very rare, handbuilt, sample units ... these are made to show to Automobili Lamborghini SpA and on shows to get feedback ... and sometimes these are offered for sale. 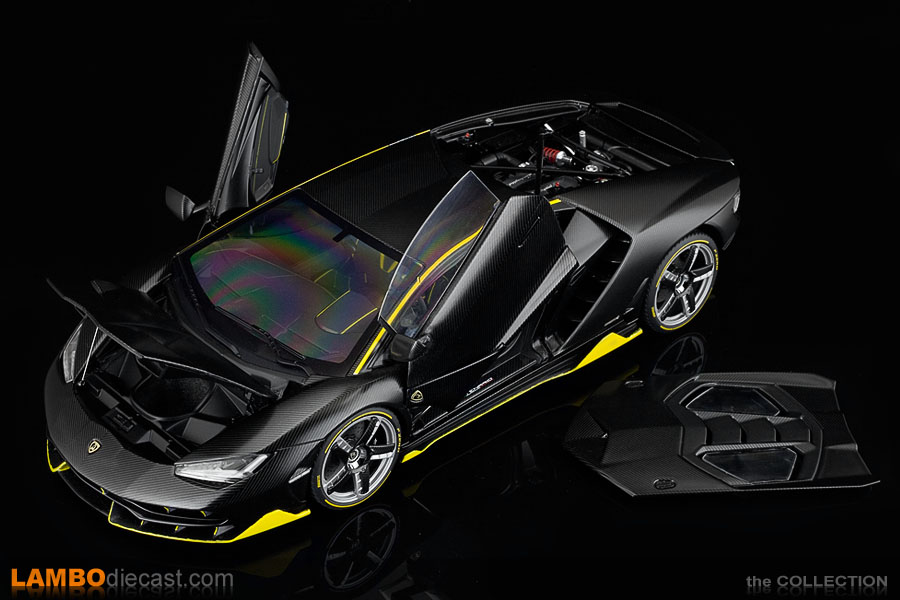 I already have a few of these AUTOart samples, and I know the production model might not look exactly the same, but I still love rare models like this, even if they have a few flaws, that's why these are samples ... and this Centenario has one major flaw ... it should be more glossy.

I have been lucky enough to see the real Lamborghini Centenario be unveiled at the Geneva Motor Show, and despite the rather 'different' rear diffuser, I really like this limited edition, the entire body is finished in glossy, clear carbon fiber with a satin roof, satin vents in the front bumper and a satin finish on that impressive rear diffuser ... and this is where the AUTOart sample went wrong, the body should be glossy, a lot more glossy than this sample, but I did hear the production version from AUTOart will be perfect and shiny on all the right places.

So I'm really happy with this sample, not many exist, and it is visibly different from the production version that should be released by mid-2019, first shade from AUTOart on the Centenario will be light blue by the way, not this amazing carbon fiber finish with the yellow livery ... just like the press car, and the one the factory kept.

That's right, 20 Lamborghini Centenario have been sold to customers, but 21 have been built, one is still in Sant'Agata and on display sometimes in the official Lamborghini Museo on the factory grounds, next to their Veneno and Veneno Roadster for instance. 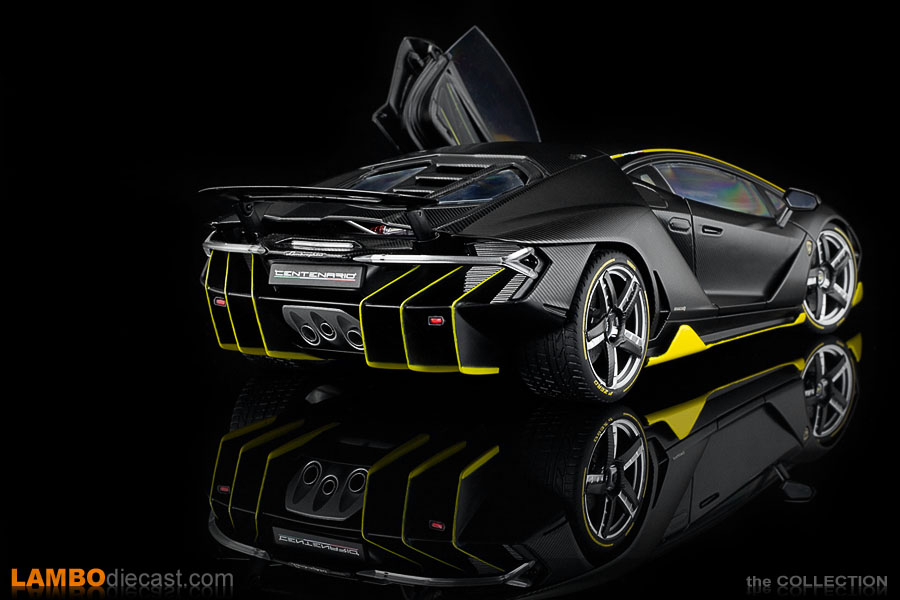 I'm really happy AUTOart is using a white taillight on this scale model, that is how we usually see the real Centenario anyway, it only lights up red when the headlights or on, or when the driver hits the brakes, as this is a replica of the Geneva Motor Show car it comes with the yellow livery option, this means we'll see yellow lines and Pirelli PZERO scripting on the tires, yellow lower front bumper, pinstriping on the front bumper vertical fins, on the bespoke side sills with their vertical stabilizers front and rear, and naturally on the six massive fins of the rear diffuser. But there is also a line on the front pillars and on the edge of the roof ... AUTOart even included the Centenario script on the roof, just like on the real car.

At the rear, we also notice the Centenario license plate, and on the show car, Lamborghini used a thin 'Tricolore' line underneath the Centenario script ... AUTOart included that too, that's attention to detail. Also, note the small red lights mounted in the rear diffuser ... one thing that will probably be present on the actual production model will be the white side lights ... the indentation is visible at the rear of this sample, but there is no light while up front it is already fitted.

AUTOart uses a removable engine cover, fitted with small magnets ... on the real car the engine cover is fitted with a quick release system as seen on race cars, and it is not hinged as seen on the Maisto 1/18 model of this rare Bull. So you can take the engine cover away and admire that impressive V12 engine next to a set of red springs ... I personally would prefer yellow springs to color code with the yellow exterior livery, but the real car came with red springs too, so these are correct. 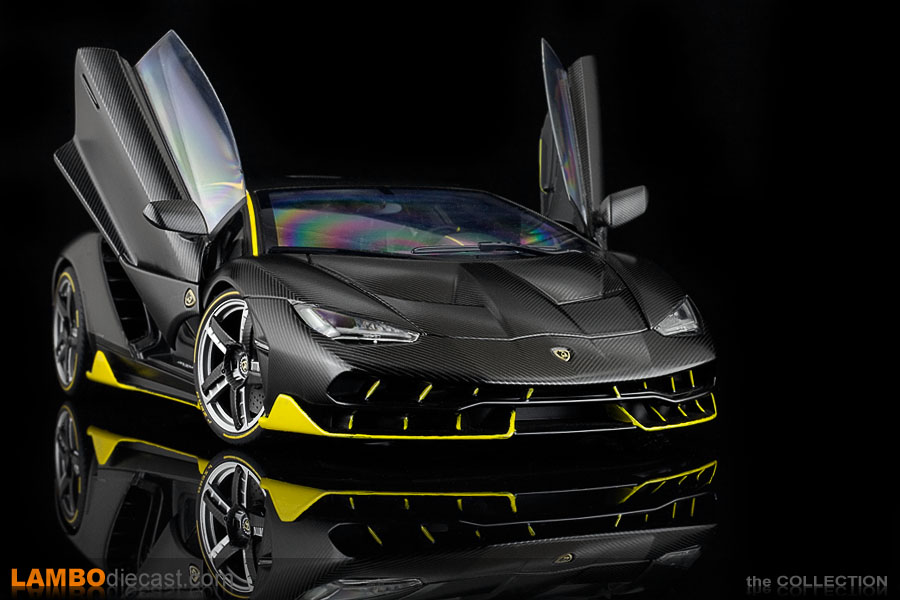 Up front, AUTOart has an openable luggage space cover ... calling it a luggage space might not be the right word as there is not a lot of space available, with the large vents in the cover and a central spot to fit a racing helmet, I don't think there is a large set of luggage available to fit underneath this cover, but it opens the unveil a nicely detailed and finished compartment, well done AUTOart.

The wheels on the Lamborghini Centenario are bespoke to this model only, a very nice five-spoke design that comes with clear carbon fiber fins for added cooling of the carbon ceramic discs, I really love how AUTOart was able to replicate the details on these wheels covering amazing looking brake calipers and disc brakes.

On the interior, the special lightweight racing seats also get some yellow details and piping, same on the door panels and dashboard, but the most impressive thing inside the Centenario is the new, very large center console touchscreen display, and AUTOart replicated that perfectly too.

I know this is only a sample, and it is not 100% identical to the production model AUTOart will be building later in 2019, but I still love it a lot, from what I can tell from this sample the carbon fiber pattern will be applied stunningly well, and if it comes in a nice glossy shine I'm sure it will look even better.

The yellow livery might not be perfect on this sample either, but keep in mind it's a sample, who knows how though its life has been before I got my hands on it, I'm sure it traveled a lot more Miles than some of the real Lamborghini Centenario during transport.

So will I be adding the clear carbon fiber finished production model of the Lamborghini Centenario LP770-4 when AUTOart releases it? What do you think?