I already had two AUTOart LB-Works Limited Lamborghini Aventador in my collection, the amazing looking black on gold version and the red metallic one, also on gold, which some refer to as the 'Iron Man Edition', which I was hoping would be a 1/18 scale replica of the Miura Homage LB-Works Limited edition Aventador that actually exists in Japan, but AUTOart changed the color and didn't add the 'Miura 50' logos, probably due to licensing issues.

When AUTOart released the first photos on this 'Hyper Blue' shade I wasn't convinced to be honest, it's just all-blue, a bit of an overload at first sight with the bleu wheels and only a few black parts ... but then I saw the interior ... and the combination with blue inside this car made it appeal to me, so I couldn't resist adding it anyway. 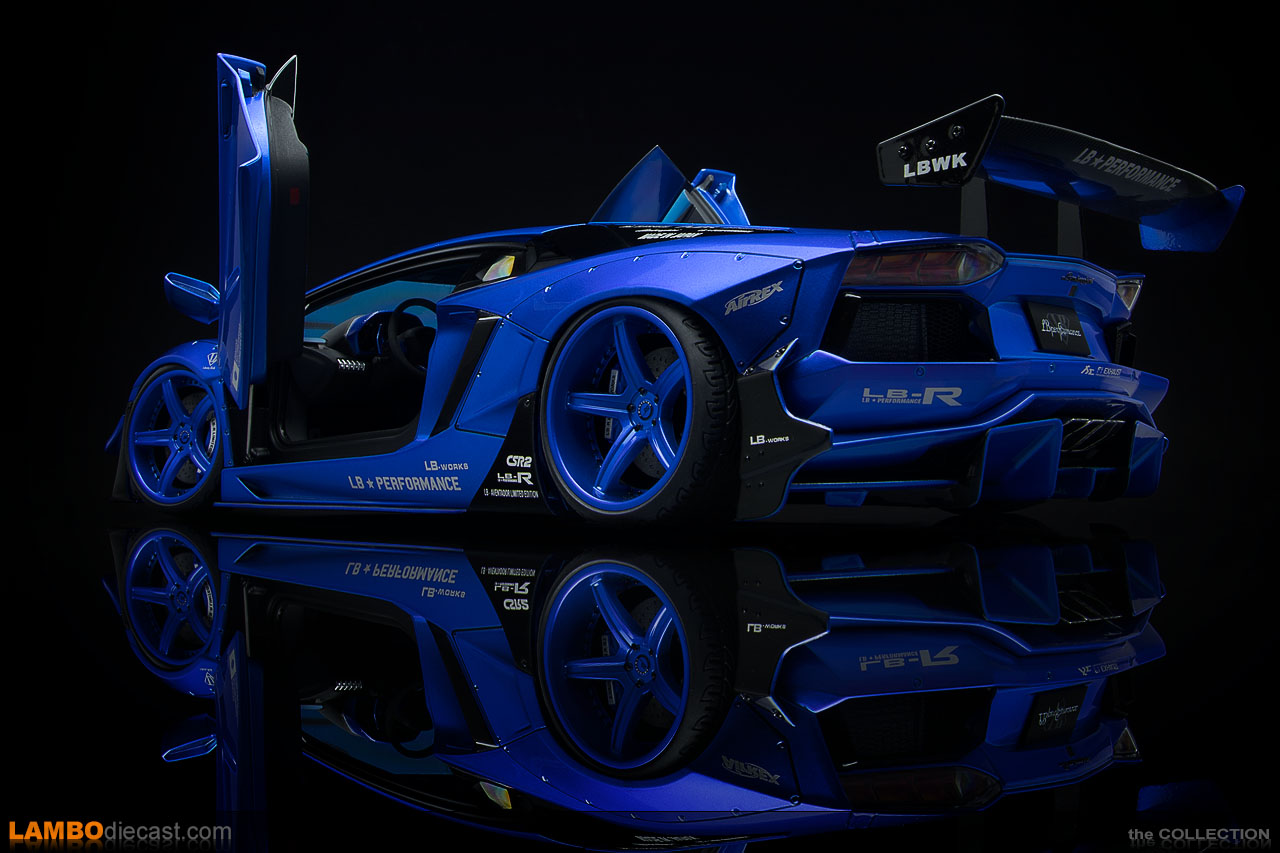 And more importantly, why I'm not sure the black on gold even exists in real life, this blue Bull does, it's nr 18 out of the 50 limited edition LB-Works kits, and it's located in Japan, rolling on Sky Forged S201 wheels, 9x20-inch on the front axle and 13x21-inch on the rear one, with 255/30R20 and 355/25R21 respectively, built on a 2016 Aventador S with a FiExhaust and AirRex air ride suspension.

So once again I've spent a considerable amount of money on yet another AUTOart model of which I already had other shades, but as I mentioned, the interior of this one more than makes up for the overload of blue on the exterior, and this car exists just like this in real life ... with a few small differences.

AUTOart took some liberties with the decals on this car, from the photos I was able to find online these don't really correspond to the real car, but we all know these cars tend to change over time, I researched this one further, and I found another LB-Works Aventador in exactly this shade of blue, on the same color-coded Sky Forged S201 wheels, so did that owner decide to replace the regular LB-Works kit with the Limited Edition version, or are these two different cars ... I don't know.

One thing that I did notice on all of the five shades made by AUTOart is the fact they haven't put the Pirelli P-ZERO script on the tires, while this blue one does come with those in real life, but it seems AUTOart didn't fit that on their models.

Despite a few decals the don't seem to be exactly the same on the photos of the real car in Japan, AUTOart did manage to get the shade of blue perfect ... there is a hint of pink in this paint from certain angles, and that corresponds to the actual car, down to the painted inside of the vertical plates on the rear wing and the thin black stripe from the front to the back on this specific car. 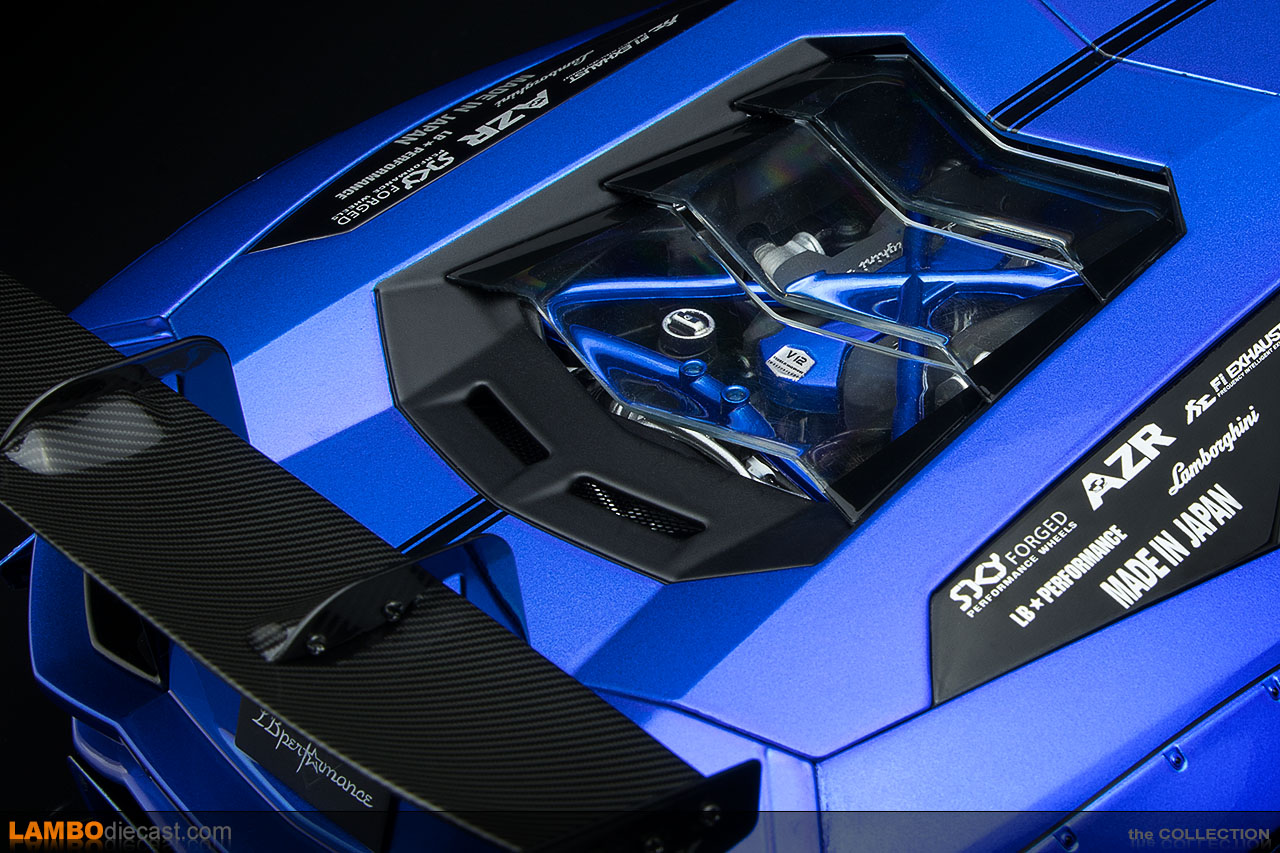 On this shade AUTOart opted to paint the engine X-Brace in the same shade of blue as the exterior, also the T-Section between the manifolds has been color-coded ... and I have to admit this looks so much better than the 'burnt metal' look on the other shades, that latter makes it look plastic, while on this car the blue paint makes it look like real metal, I like it a lot.

And then we get to the part that made me buy this model, the interior, on both the black and the red one, the interior is plain black, which looks good, but that blue interior inside this version looks absolutely stunning, and it has an Alcantara look about it, that might just be me, but on the two other models, we have that satin leather shine, on this blue one it more a matt finish that reminds me of Alcantara.

Note the thin blue contrast line on the lower part of the seats that runs onto the sides of the seatbacks, while the headrest shows a white Raging Bull crest, naturally, this model comes with seatbelts fitted, but also the top of the dashboard and the sides of the central console are finished in the light blue shade of the seats, very nice indeed. 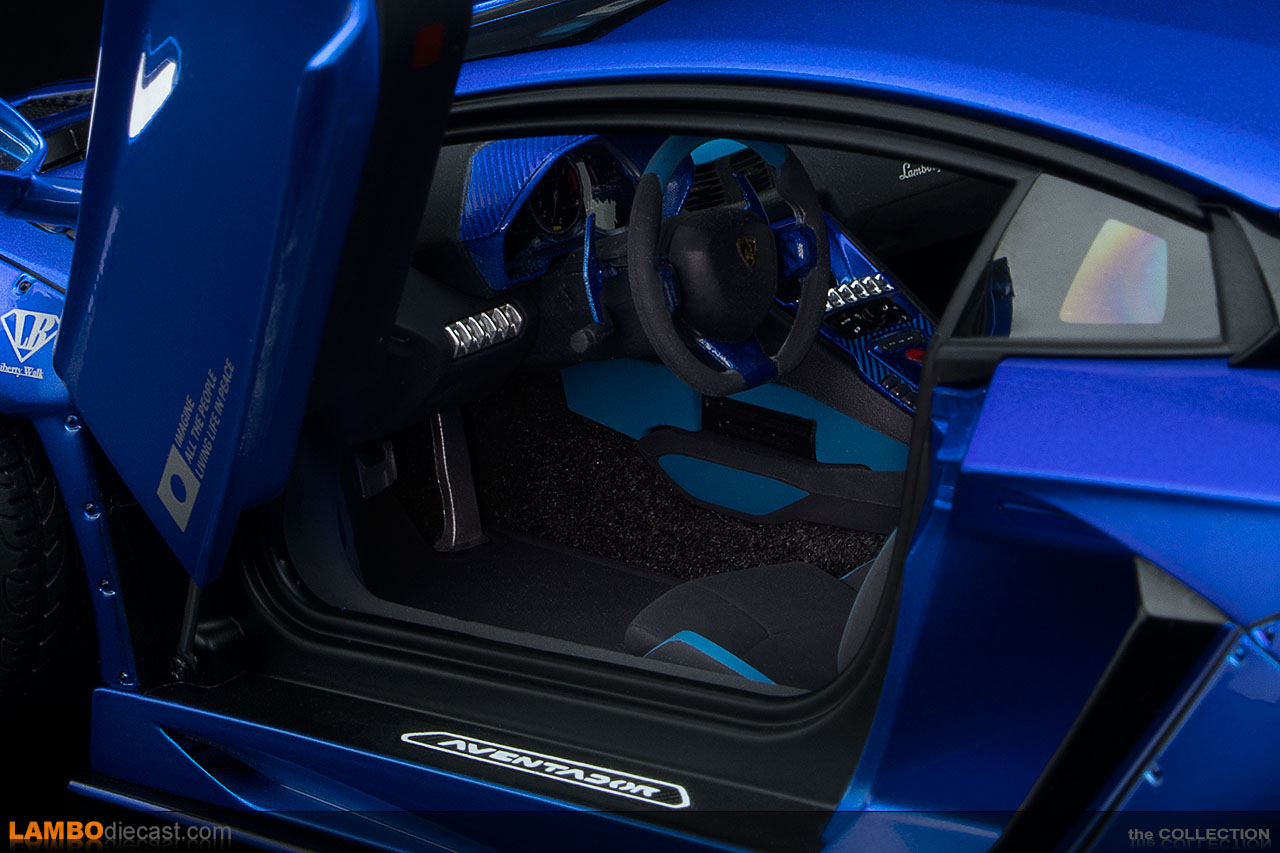 Another amazing touch on the interior is the blue-tinted carbon fiber, I admit the pad is not a decal but a cf look-alike mold, but with the central console and the door handles all in a bright blue carbon fiber pattern, it just looks beautiful.

There are still two more versions to be released by AUTOart on this LB-Works Limited Edition Aventador, the satin silver one, and the Martini livery one, the latter had some controversy at first because a real car in this livery was a Roadster, not a coupe, but by now there is a real coupe with this kit that boasts the Martini livery wrap, and it also has the two different shade wheels on either side, just like the AUTOart model. 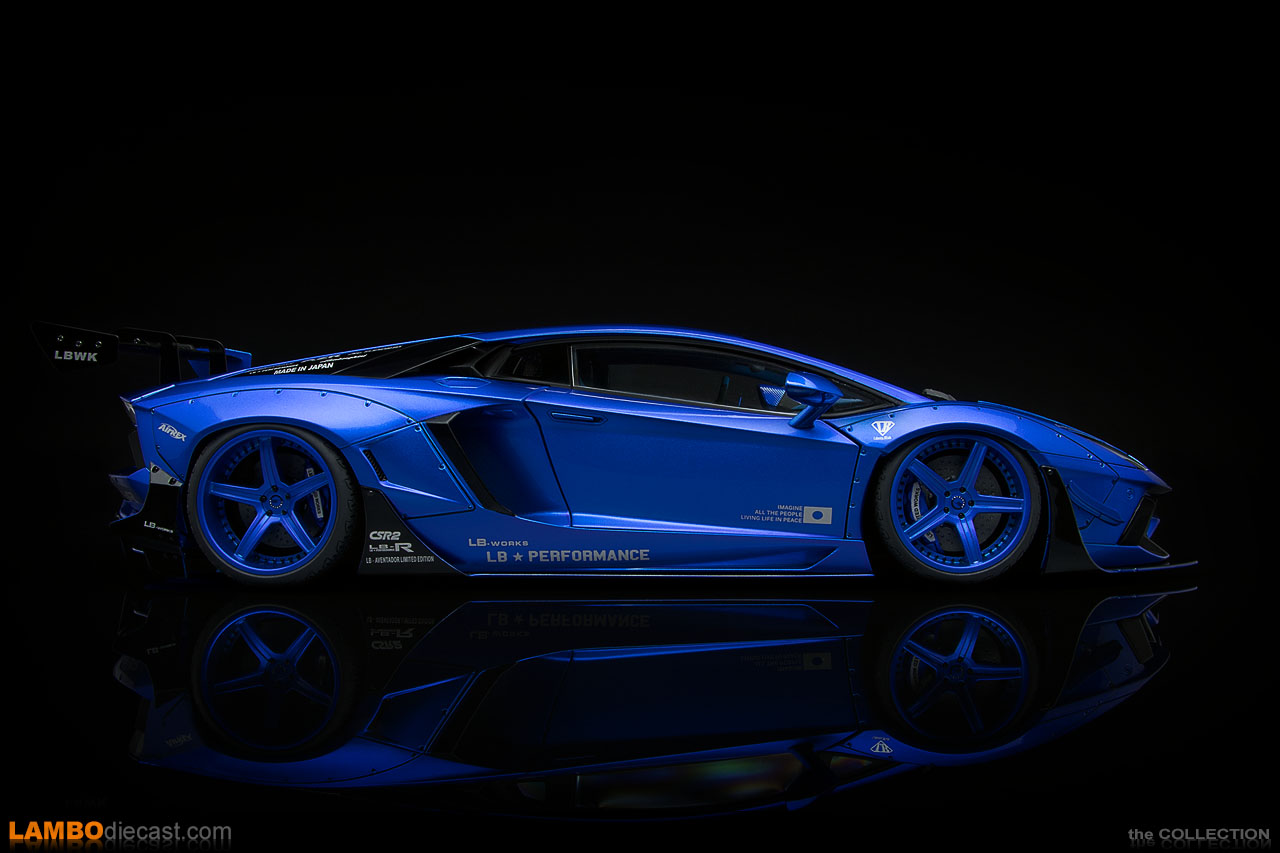 So which one should you buy? I can't be completely sure yet as I haven't seen the two still to come in real life, for me personally the satin silver one with the red interior is the real 'must-have' of the five, just because that one came to the Geneva Motor Show for the premiere of Kato-San's LB-Works Limited Edition Aventador widebody kit, and you know I always want the show car or press release configuration for my collection.

But I will say this, despite the overload of blue on this specific model, this Hyper Blue metallic AUTOart LB-Works Limited Edition Aventador comes with the nicest interior and engine compartment of the three shades I own at this moment.